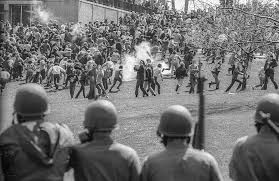 We're finally on our own

This summer I hear the drumming

Perhaps no other song encapsulated the tumultuous times of that late spring of 1970 than Neil Young’s opening verse to 'Ohio'. Nationwide protests on college campuses against the United States’ participation in the Vietnam War culminated in this shooting at Kent State. Young would later be quoted as saying, “probably the biggest lesson ever learned at an American place of learning”.

Equally uprooting at that time was concern for the environment, which was reeling from misuse and abuse, in the form of pollution, oil spills, and very little, if any, controls in place to curb its spreading. Protests focused on environmental ignorance, and from many of the same college campuses mentioned above, Earth Day was born on April 22, 1970 as the genesis of the modern environmental movement.

From the Earth Day website: The first Earth Day launched a wave of action, including the passage of landmark environmental laws in the United States. The Clean Air, Clean Water and Endangered Species Acts were created in response to the first Earth Day, as well as the creation of the Environmental Protection Agency (EPA). Many countries soon adopted similar laws.

“Despite that amazing success and decades of progress, we find ourselves facing an even more dire, almost existential, set of global environmental challenges, from loss of biodiversity to climate change to plastic pollution, that call for action at all levels of government,” said Denis Hayes, the organizer of the first Earth Day and Earth Day Network’s Board Chair Emeritus. 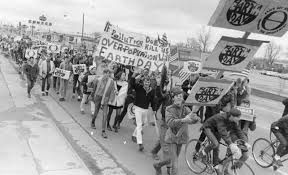 In 1970, Earth Day related protests / marches across the U.S. included some 20 million persons, or roughly 10% of the population at that time. Today, the Earth Day Network mobilizes more than 1 billion people globally (~13%), with thousands of partner networks in 190 countries. Its mission is to build, educate, and make active, the largest environmental movement to drive transformative change across the planet. 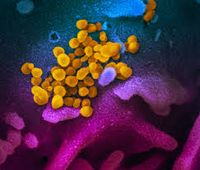 For its 50th anniversary on April 22, 2020, the Earth Day Network had planned to mobilize its 1 billion activists in local marches, as well as community earth restoration projects, all over the globe. Sadly, many of these gatherings have been postponed to the fall of 2020, or canceled altogether. Yet, when your plan A stalls, it’s time to launch plan B, or C, etc.

In recognition of safe social distancing mandated by coronavirus, the Earth Day Network is taking its initiatives digitally, in perhaps the world’s largest online event to date. If interested in this movement, visit Earth Challenge 2020.

Although we cannot gather as groups at this time, if even for projects out-of-doors, please remember one important fact: As individuals / consumers of goods and services, our voice, vote, and common collective action makes a huge difference. We all wield tremendous power and influence, so if inclined to participate, don’t let today’s lockdown and/or isolation prevent you from doing so.

For example, the KSM public performance plans to present the 35th anniversary of the Amazonas ‘85 Expedition, my first journey into the tropical rainforests of Brazil, were also canceled. As plan B, I converted my analog films of songs from the Echoes Within The Forest project, to digital. Thereafter, I built a KSM YouTube channel to help continue its awareness, via social media and proper social distancing. To reiterate, when best laid plans stall, a bit of creativity and desire to find another path can go a long way.

In closing, and in an unintended benefit of COVID-19, pollution, smog, waterways, et al, have all seen improvement, as a result of a lack of economic activity, because there are far less individuals scurrying about the planet. Yet, when we finally curb this pandemic’s stranglehold, and we will, the earth will require even more attention going forward. So please, let your voice be heard, and your efforts become visible.

Earth Day Is Not Just A One Day Per Year Event

This past April, I had the pleasure of performing for my alma mater High School, Colorado Academy (CA), in southwest Denver, CO. As one of the top independent schools in the State, Kindergarten through 12th grade, CA has a multi-faceted curriculum that challenges each student to maximize their potential in academics, athletics and the arts. As a result, it was the perfect environment in which to test market an entertaining, yet educational performance of Echoes Within The Forest, entitled A Treasure In Jeopardy.

The 30-minute multimedia show, A Treasure In Jeopardy, combined visuals and video with song, and shared elements of nostalgia, fact, education and performance in its presentation. The primary goal of the show was to see that if entertained, students may be more apt to absorb and/or become interested in complex subject matter, such as the deforestation of the Amazonian rainforest in Brazil.. The latter encompassed topics from natural resource depletion to biodiversity; deforestation and its reasons; the role and plight of indigenous peoples; dams and energy from the Amazon river; and overall, the long term consequences of this exploitation on the planet. The secondary goal was to encourage students to act, as in 'get involved'. Presented on Earth Day, another objective was to impress upon students the importance of becoming stewards of the earth each and every day, not just once a year. 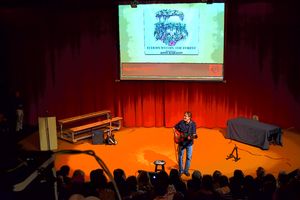 A Treasure In Jeopardy was presented to two of the three schools (Upper and Lower) on the CA campus, to more than 500 students. Perhaps not altogether surprising, the best inquiries and questions came from the Lower school grades, Kindergarten through 5th grade. Despite the obvious, Did you see a spider? and Did you get bit by a snake?, they had some really great insights, such as: (4th grader) Doesn't the government know that cutting down trees will make it difficult to breath? Or, (2nd grader) How many tress do we need to plant to help? It's this kind of inquisition that we can only hope will embody our youth, in order to make the right decisions for our future, when they're in a position to do so.

In retrospect, fielding those questions was the best part of the performance, for it showed the students had listened, and they were concerned to know more. Mission accomplished. 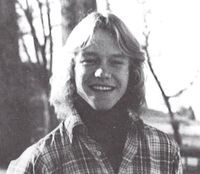 In closing and for posterity sake, my senior picture shows the head of hair I wish I could still sport today. C'est la vie... And yes, they did have color film back then. Our school just couldn't afford it for the yearbook!